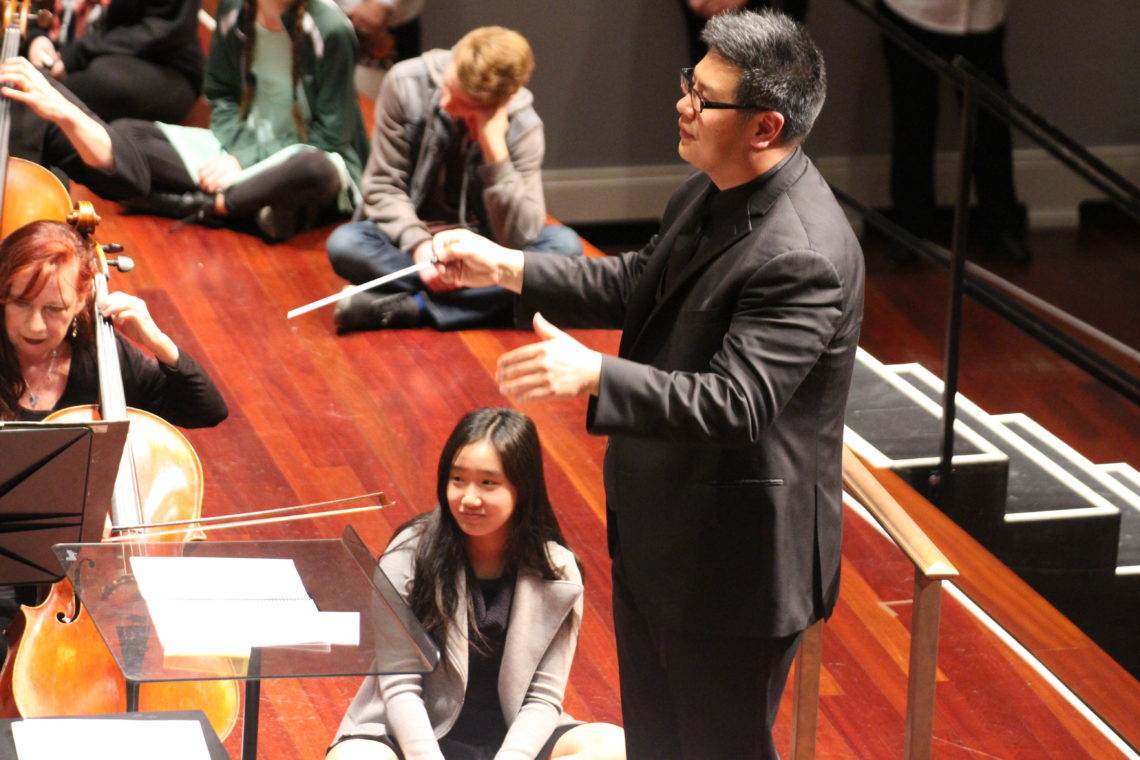 He has been a contributing editor for Hal Leonard’s Essential Elements for Strings, D’Addario Orchestral Strings Artist, and a member of the Board of Directors of the Midwest International Band and Orchestra Clinic. Orchestras under his leadership experienced a great deal of success including eight Indiana State School Music Association (ISSMA) State Championship and being named Grand Champions at the National Orchestra Cup at Lincoln Center’s Alice Tully Hall. In addition, in 2009 and 2014, Carmel High School Symphony Orchestra was also invited to perform at the Midwest International Music Clinic in Chicago, IL.

While the director at Carmel, the orchestra has performed all throughout the United States and internationally. He has collaborated with numerous artists, groups, and conductors such as Lynn Harrell, David Kim, and the Indianapolis Symphony Orchestra. He has produced multiple recordings of complete symphonies with the CHS Symphony, has commissioned and premiered several works for string and full orchestras, and has grown the program to over 375 string players and over 60 wind and percussionists spread out over seven orchestras.

He is a frequent guest conductor of all-state, regional, and festival orchestras throughout the country, and has presented string teacher sessions, workshops and conducted concerts at regional and state music educator conferences in California, Georgia, Florida, Illinois, Indiana, Kansas, Kentucky, New York, Ohio, Pennsylvania, Texas, Washington, as well as at the ASTA National Convention, Midwest International Music Clinic, and VanderCook College. He has also served as conductor of the New World Philharmonic Youth Orchestra (Indianapolis, IN), Cave Run Symphony Orchestra, and Sewanee Summer Festival and other summer music festivals. In 2015, he was the featured presenter and conductor at the Australian Strings Teachers Association Conference and the Maryborough Music Conference (Queensland, Australia).

He is the past-president of the Indiana American String Teachers Association and the chapter was awarded the ‘Most Improved Chapter’ during his time as president. He is a graduate of Indiana University Jacobs School of Music and holds his Master’s degree from Indiana University-Purdue University of Indianapolis.

“It is an incredible honor and responsibility to introduce classical music to our children because it will shape and mold their heart and souls so that they grow up and become warm, caring, imaginative, and passionate individuals,” said Han. “It is my sincere hope that families who come to the Family Fun Concert will have an incredibly fun and entertaining afternoon and that everyone will walk away with their brighter hearts and wider smiles. Very possibly, we may also inspire a child to become the next Mozart or Yo-Yo Ma!”