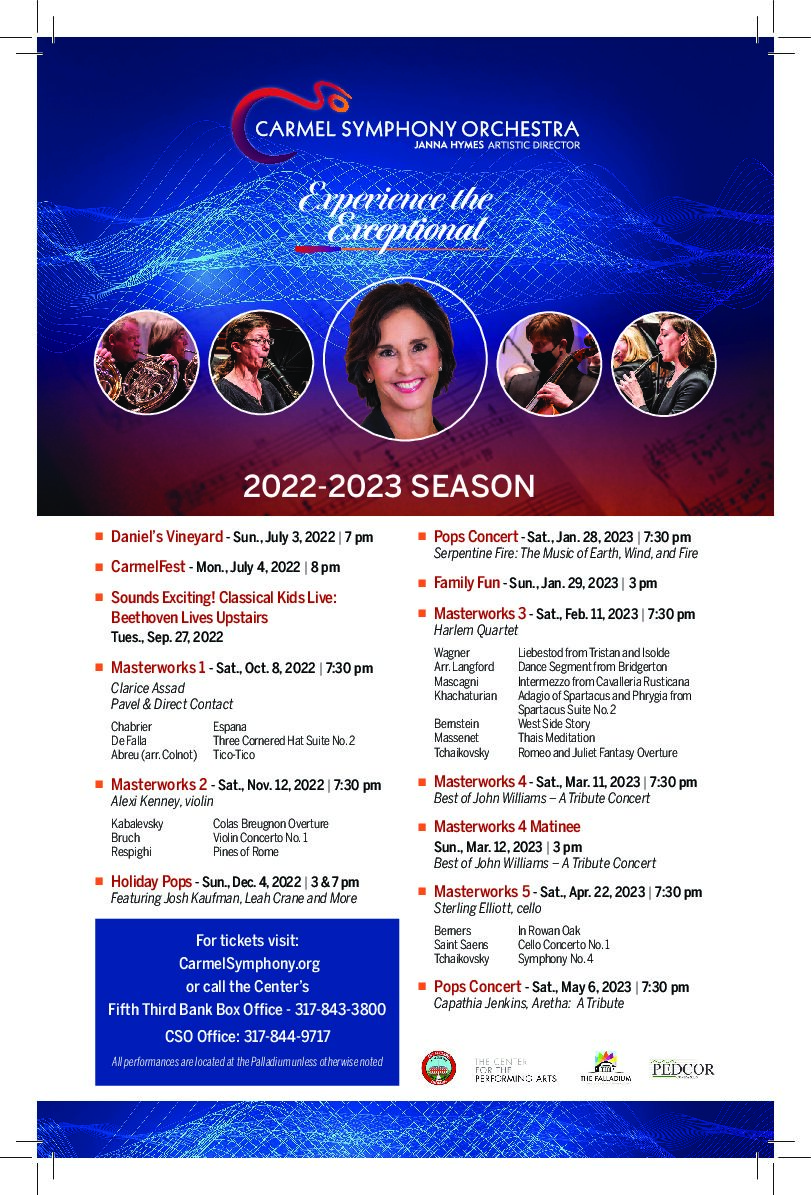 CARMEL IN — A rousing tribute to the Queen of Soul. The very best from the master of the movie score. A fiery Latin celebration. A reimagined Holiday Pops.

These are just a few of the delights awaiting fans as the Carmel Symphony Orchestra (CSO) announces its 47th season, a schedule filled to the brim with an exceptional mix of classical and pops performances.

“After experiencing three seasons interrupted in ways none of us could have envisioned, our musicians and our CSO fans are more than ready to return to the Palladium and revel in some truly great music!” enthused Carmel Symphony Orchestra Artistic Director Janna Hymes. “We so appreciate everyone hanging in there with us throughout the ups and downs of COVID, and to reward you we’ve programmed an upcoming season of exceptional performances, music both familiar yet unexpected from the CSO!”

The Carmel Symphony Orchestra, founded in 1975, is a professional orchestra that is among the resident companies of the Palladium at the Center for the Performing Arts. The majority of its concerts are performed at the Palladium, but the orchestra will venture beyond that venue in the new season for two performances:

Programs of patriotic music to complement Fourth of July festivities will be performed on both days.

An education program exclusive to students from area schools will be presented on September 27 when CSO brings Beethoven Lives Upstairs: A Classical Kids Live! Event to the Palladium.

Those three performances set the stage for the official debut of the orchestra’s 2022-23 season. The schedule includes:

Serpentine Fire: the Music of Earth, Wind and Fire

The Best of John Williams – a Tribute Concert

“Without a doubt it’s the most diverse, ambitious season we’ve ever brought to the Palladium,” Hymes stated. “We’re thrilled with the guests we’ve booked – all are tremendously sought-after artists who pack the houses worldwide, and we’re just delighted to bring these fantastic talents to our audiences here in Central Indiana.

“Come to our CSO performances,” she added. “Bring your family. Bring your friends. If you’re familiar with us, you’ll hear exactly what you expected – a highly skilled orchestra presenting world-class music, in a world-class venue, with world-class guest artists.

“And if by chance you’ve never been to a CSO concert, well, make this your season to discover something extraordinary. We promise you will not be disappointed!”

Tickets for the upcoming season will be available soon at CarmelSymphony.org, and at the Palladium Fifth Third Bank Box Office, 317.843.3800.

The 2022-23 Carmel Symphony Orchestra season is supported by the City of Carmel, the Center for the Performing Arts, the Palladium, and Pedcor.