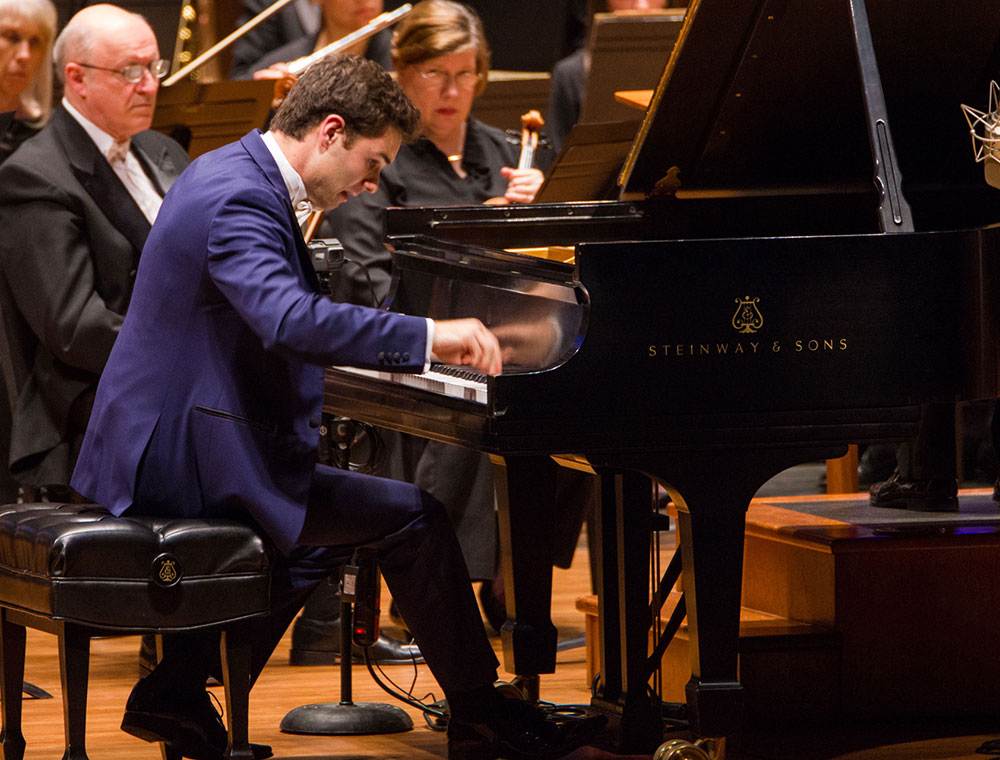 Drew Petersen makes his Central Indiana concerto debut as the winner of the 2017 American Pianists Awards and Christel DeHaan Fellowship of the American Pianists Association when he joins the Carmel Symphony Orchestra on Saturday, November 11 at 7:30 p.m. at the Palladium, with a pre-concert conversation, “Music Matters,” at 6:45 p.m.

The concert begins with Beethoven’s Egmont Overture. Perhaps less known than his Fifth Symphony, but popular, especially among musicians. Says George Zack who programmed the 2017-18 season, “Everyone gets to do something really fantastic, and it leaves everyone breathless!” Similar is the pace of Weber’s “Invitation to the Dance” which was written as a concert waltz – a waltz more for listening than actual dancing, although the ballet, “Le Spectre de la Rose” was choregraphed to it. Zack programmed 20th Century composer Paul Hindemith’s “Symphonic Metamorphosis,” based on the themes of Weber’s compositions. But undoubtedly, the piece de resistance for Petersen’s talents is Chopin’s Piano Concerto No. 1.

“Everyone knows Chopin,” says Zack. “You think of lace cups and having champagne in the afternoon. It’s that way until you start studying Chopin. It’s full of strength and very difficult to play. When you get done with that piece, you are tired!”

According to Music Director Janna Hymes, the four musical pieces in this concert are truly spectacular and create a not-to-be-missed experience. “Chopin was only 20 when he wrote this concerto, and despite his not liking to write for orchestra, it is an astonishingly luscious piece for the piano, and the orchestra acts as a real accompaniment,” she said.

To gain additional insight into the performance, “Music Matters” provides a free, pre-concert, behind-the-scenes conversation with the conductor in a relaxed atmosphere. In these informal discussions, audience members are made privy to interesting facts about the evening’s composers and their music.

Flex & Family subscriptions are available via the CSO office at 317.844.9717. Single tickets can be purchased by visiting CarmelSymphony.org or by calling the Center’s Box Office at 317.843.3800. Discounts for students are also available: the $5 YouthPASS for High School and younger, and the $10 CollegePASS.