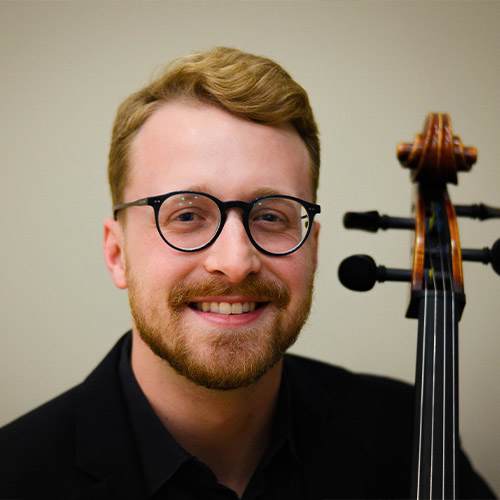 Philip Kettler was recently appointed as the Second Cellist of the Indianapolis Chamber Orchestra, making him the organization’s youngest member. As an orchestral musician, he has also performed with the Sarasota Orchestra and serves as the Associate Principal Cellist of the Terre Haute Symphony and Assistant Principal Cellist of the Carmel Symphony. In addition, Philip is a member of the Nashville Music Scoring Orchestra at Ocean Way Studios, where he has performed as a recording artist for studios including Microsoft, Sony, EA Games, EMI, Netflix, FX, Bungie, and many more. Philip was a member of the 2016 National Repertory Orchestra and has been a fellowship performer at the summer music festivals of Aspen, Bowdoin, and Aix-en-Provence (France).

In recent seasons, Philip has been featured as a soloist and chamber musician with the Chevy Chase Concert Series (Washington, DC), Blair Concert Series (Nashville, TN), Concerts at Bradley Hills (Bethesda, MD), and Chamber Music Evergreen (Evergreen, CO). He has been a top prize winner in the Washington Performing Arts Society Feder Memorial String Competition and US Army Orchestra Concerto Competition. Philip has performed in master classes for Johannes Moser, Alisa Weilerstein, Zuill Bailey, and Hans Jørgen Jensen. As a chamber musician, he has worked with members of the Vermeer, Brentano, Ying, Shanghai, and Pacifica Quartets, as well as the Chamber Music Society of Lincoln Center.

An advocate for new music, Philip served as solo cellist of the 2019 Atlantic Contemporary Ensemble, in residence at the Atlantic Music Festival, a group with which he gave the world premieres of over twenty new pieces. He was also the solo cellist of the IU New Music Ensemble for the 2018-2019 season and has commissioned and premiered numerous works for solo cello and small ensemble. Philip is also a passionate performer of early music and has concertized professionally on the baroque cello and viola da gamba. He is a member of the Concentus Renaissance Ensemble and was most recently featured as a guest artist in the 2019 Vanderbilt University baroque faculty recital.

Philip is currently a candidate for the Doctor of Music degree at the Indiana University Jacobs School of Music, where he also earned his Masters degree in 2019. He received his Bachelor of Music degree from Vanderbilt University and also completed studies at the Conservatorium van Amsterdam in the Netherlands. His principal teachers include Eric Kim, Felix Wang, Dmitry Ferschtman, and Peter Howard.